Ovarian cancer does have symptoms: here are four to look out for

Most women with this ovarian cancer are presenting at stage three because they are not aware of the danger signs.

Maria McHale writes in The Irish Times about ovarian cancer.  She states that it is especially difficult to package ovarian cancer into a good news story. It used to be commonly referred to as “the silent killer”, but it’s definitely not silent. 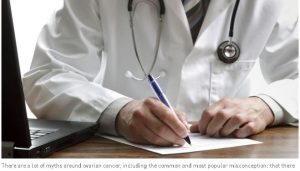 There are several symptoms but because they are often confused with other illnesses they can mask and delay ovarian cancer diagnosis.

Add in the fact that there is no screening test and it means many women are unaware they have ovarian cancer until it’s too late.

“Over 75 per cent of ovarian cancers present at stage three and that figure has not changed for 20 years. There’s no screening test and the vast majority are sporadic cases.”

Ovarian cancer is the fourth most common cancer in women in Ireland. Each year some 350 Irish women are diagnosed and currently the incidence rate is 24 per cent higher than the EU average.

There are a lot of myths around ovarian cancer that need to be dispelled, including the common and most popular misconception: that there are no symptoms.

There are four clear symptoms that all women and GPs should be aware of. At first, these symptoms may seem vague, but the key is in their frequency – do they come and go, or are they persistent?

If you are experiencing persistent bloating, persistent tummy pain, difficulty eating and feeling full quickly, and the need to urinate more frequently on 12 or more days in any given month, then please visit your GP.

Another myth is that a smear test will pick it up – it won’t. Ovarian cancer cannot be detected in this way although surveys suggest many women mistakenly believe this. There currently is no screening tool, which is why it is vital that women know the warning symptoms.

Dr Flannelly suggests the CA125 blood test, which can be used as a marker, is non-specific and may result in false negatives as well as false positives. “CA125 is a chemical found in blood that is sometimes released from ovarian cancer cells. It is known as a tumour marker for ovarian cancer, but not all women with ovarian cancer will have a raised CA125 so that’s why it is not considered a 100 per cent accurate screening tool.” It can be used as a baseline to evaluate, she says.

Thinking you probably just have IBS is another common issue because it’s not unusual for women with ovarian cancer to be diagnosed initially with irritable bowel syndrome (IBS).  If this happens to you and your symptoms persist, go back to your doctor. IBS is incredibly rare in women over 50 – so IBS-type symptoms that develop later in life should be a red flag to your doctor.

The above information is only a small extract from Maria McHale’s article.