What Causes Colic In Babies?

We expect babies to cry. But some newborns, about 15 to 25 percent, cry a whole lot more than others. When these otherwise healthy babies cry excessively and inconsolably for no apparent reason and they are not: 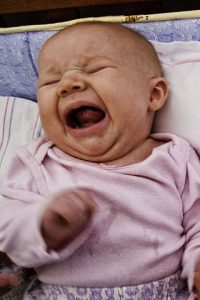 But yet they are inexplicably miserable. ! Ths is what  pediatricians call colic.

Colic is somewhat subjective, and whether your baby’s crying is “average” or “excessive” may depend on how much you can endure.

But pediatricians generally use the “rule of threes” to determine colic: crying bouts that start when a baby is about 3 weeks old (usually late in the day, although they can occur anytime)

It typically peaks at 6 to 8 weeks and subsides by 3 to 4 months.

The medical community doesn’t really know inconclusively what causes baby colic. Some chock it up to a rite of passage that usually begins at a few weeks old to 3-4 months, sometimes longer. Others blame it on an immature digestive tract, allergies, or a developing brain/neurological system.

What are some other symptoms to look for?

This time can be a very difficult time for parents and can be frustration when you baby has these symptoms. But, there is a reason for your baby’s extreme fussiness and there are natural ways to treat baby colic.

At Roscore Clinic we treat these symptoms with herbs which have a long tradition of use and are known as Carminatives.

What is a Carminative?

Carminatives are herbal remedies that are rich in volatile oils. Through their activity in the digestive system is stimulated to work properly and with ease by coordinating and regulating gut contractions. The main action is to soothe and settle the gut wall, thereby easing gripping pains and helping in the removal of gas from the digestive tract.

Digestion is very much a dance. It’s an orchestra influenced by many factors and there are lots of musicians playing at the same time to produce.

What are Volatile Oils?

Volatile oils are extracted from plants to produce essential oils and are some of the most important medicinally active plant constituents. They are also widely used in aromatherapy as they are usually responsible for the distinctive odour of a plant. 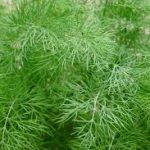 What herbs are in a Carminative Herbal Remedy?

At  Roscore Clinic we make our Carminative Herbal Remedy from

We use fennel seeds, which have a high content of fennel essential oils and fennel

leaves. Fennel leaves are gentle and act slightly differently. They’re also more soothing. They are protective of the gut. They are probably more anti-inflammatory than the seeds.   60% of the herbs we use in our treatments are grown in our beautiful herb garden. 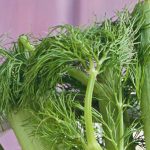 All the above herbs are mixed together, invariably, the formula is made up to respond to the symptoms of each baby as a one fit all formula will not suit all young children. If we have a mix of symptoms, we generally a need a mix of herbs to respond to that. Other herbs,  to consider would be a small amount of fresh ginger root, not dry ginger. Dry ginger is too strong for a little child. All the herbs can be given very safely to an infant or newborn baby.

The mode of action of carminative herbs is largely a result of the volatile oils they contain. These compounds help increase gastric emptying and are mildly irritating to the gastric mucosa so that peristalsis is increased, thereby relieving cramping and expelling gas. It should be noted that carminatives are NOT necessarily muscle relaxants, but are useful (and synonymous with) antispasmodics.

At Roscore Clinic we treat a lot of young infants and babies for colic. Colic is very common. Where the colic is not anatomical, the children usually respond really well to our safe and natural herbal remedy.

There are two different types of colic:

There are two types of colic that we come across in Roscoe Clinic.

1.    First of all, there’s colic caused by anatomical malfunction of the gut, which may not respond to herbal treatment. If colic is anatomical, you will invariably see projectile vomiting. Anatomical means an obstruction. Where there’s an obstruction to the flow of food into the stomach. The valve from the oesophagus into the stomach may be defective from the stomach into the small intestine. In this case, you will see projectile vomiting. Surgery may be required.

2.    Colic that is associated with inappropriate diet or some weakness in the digestive system, itself, maybe enzyme deficiencies, or a lack of coordination of the entire digestive process.   What we’re dealing with here is simple, straightforward, digestive malfunction, which is not associated with an anatomical malformation.

One thing a mother could consider is changing the baby’s formula. However, we  have been saying for 20 years in Roscoe Clinic  that probably the best milk source- is breast milk

Emmett Walsh, Medical Herbalist, Roscore Clinic states and believes that breastfeeding is the best for the child, there’s no doubt about that. That’s been proven clinically and scientifically over the last 20 years.

If a mother is not breastfeeding then regarding, non-human milk, or non-breast milk, very likely the best milk source is untreated cow’s milk, which is unpasteurized cow’s milk.

Emmett’s  advice is that if you are giving this milk to a child, you generally give three-quarters cow’s milk and one-quarter water. You heat the milk to about 65, 70 degrees for about five minutes. It is essential you don’t boil the milk.

You can also use the pasteurized and homogenized milk. Add three-quarters of that, so 75 ml’s of milk and 25 ml’s of water. This is what you give the child. You can give it to child from birth. Everything is in the milk. Before formula was invented, children were fed on ordinary milk.

If we are treating a baby for colic and depending on the individual case and if through the case questionnaire, we saw that there was a need to alter the diet of the baby, then we would recommend that as well as the herbal treatment, switch from the formula to this ordinary milk.

What if the baby is lactose intolerant?

Do you think for one minute that evolution would have progressed to the point where it is claimed by Western experts that 10 to 25% of babies are lactose intolerant?

Do you think that evolution would create that situation?

When somebody comes to Roscore Clinic with a baby and says, “Oh, my child is lactose intolerant.” What’s the proof?

Well, first of all, there’s very little proof offered. If somebody says I’m lactose intolerant, that means you are allergic to sugar, is that it? Or milk? Or the sugar in the milk?

If somebody is genuinely lactose intolerant, what that means is they have a deficiency or lack lactase, which is the enzyme that digests the lactose.

Lactose is the milk sugar. It’s the sugar present in the milk of all primates. Including, humans.

It is not the lactose that’s the problem. It’s the protein manufacturing process that’s causing the problem. The powdered milk and the homogenization and pasteurization produces a type of milk, which is very difficult to digest even for adults.

is to heat the milk to 65 or 70 degrees for five minutes. This unravels the damage which was done by the shock temperatures involved in pasteurization. In modern pasteurization, I believe that a temperature of 220 degrees centigrade, is used for a couple of seconds. This causes total destruction and destruction of the normal, healthy construction of the proteins. As a result, the proteins clump together. They go in like a ball of wool. If you have a ball of wool, you throw it around the place. You will see all the area it takes up? You will see all the space within it? It’s still a ball of wool. It’s there on the floor. It’s the way it’s presented.

Most of the calcium is bound to these massive albumin proteins. When they get shock treated it goes into a ball of wool. What happens? Everything around that protein is trapped. If that cannot be broken up and digested, you’re going to lose huge amounts of calcium.

What are the alternatives, then, for mothers?

It is widely thought if you didn’t feed your child formula they’re not getting all their nutrients – Wrong – Mothers can also feed just milk to their children as everyone over the age of 60 years of age was fed on this. All all of his grandparents were fed on either that or breast milk.

What would Emmett Walsh, Medical Herbalist, recommend to a mother with a new baby with colic?

I would recommend that they breastfeed and if not breastfeeding  I would advise them to switch to the ordinary cow’s milk at 75, 25.  Heat it to 65, 70 degrees for 5 minutes. Add a little pinch of cinnamon. A tiny, little pinch of cinnamon to oppose the nature of the milk and its congestive character. This in itself is also a carminative, will also give a carminative effect and help by reducing gas production and the other symptoms of colic.

They’re getting all the nutrients that they want for the first six months. Do not introduce any solids until the child is six months old. Keep to the milk.

We can give them carminative, herbal formula. You can give it to them in drop form. You can even put a couple of drops into the milk. The carminative formula is the fennel and all those other herbs that I mentioned earlier in this article.

If you are breastfeeding it doesn’t mean you won’t have a colic child. You could be breastfeeding and there could be an anatomical defect. You can still have the colic and the projectile vomiting. Even still, if there is no anatomical defect in the child, you can still have a child with colic.  If that’s the case, you can give the carminatives directly into the child’s mouth, or the mother takes them and the child will get the carminatives via the breast milk.

At Roscore Clinic we are very proud of our record of helping young babies with colic. Our long standing traditional natural herbal remedy has been well tested and proven successful.

Please be sure to contact us if you would like to discuss your baby’s  colic or any other condition.